Over the course of two beautiful winter days, a British film crew visited Burträsk in Sweden to tell the story of the unique taste and history of Västerbottensost®cheese. The documentary is currently being aired on GreatBigStory.com.

The people at Great Big Story in London decided to get in touch with the dairy in Burträsk with the aim of creating a short documentary focussing on Västerbottensost®cheese. They caught wind of the mysterious cheese with its unique taste and history and thought it was a story worth telling to the world.

“It’s always so enjoyable, every time we get the opportunity to tell the story of how Västerbottensost® cheese is made. The film team was very professional and polite and spent a lot of time filming at the ripening store in Ånäset. They seemed to appreciate the grandiose sight of so many cheeses resting there. The fact that they even got to see the northern lights during their visit was the icing on the cake.” - Thomas Rudin.

A glimpse into production, maturation and a dairy farm
Master Cheesemaker Thomas Rudin acted as guide for the film crew on both days of their visit, offering them an intimate insight into both production and a long awaited look at the ripening rooms where over 100,000 cheeses rest their way to maturity on spruce shelving. The film crew were first treated to a cheese tasting in the warehouse and then given an insight into the taste spectrum that Thomas Rudin uses every day to judge when a Västerbottensost® cheese has reached optimum quality. The film crew even visited one of the farms that produce milk for the dairy in Burträsk, to see first-hand where the milk that gives Västerbottensost® cheese its unique character and taste comes from.

“They followed Västerbottensost®cheese through history. Starting in 1872, when dairymaid Ulrika Eleonora Lindström first developed the mysterious recipe before continuing onwards to the present day, when Västerbottensost® cheeses is not only a Swedish national treasure but is apparently becoming known worldwide.” - Thomas Rudin.

“Being the custodian of Ulrika Eleonora Lindström’s legacy means that for me, Västerbottensost® cheese is so much more than just a cheese. I hope I was able to communicate that over the last two days with the film crew from Great Big Story,” - Thomas Rudin.

About Great Big Story
Great Big Story, owned and financed by CNN in New York, is an independent media company that travels the globe looking for fascinating and thought provoking stories to tell about people, places and things that change the way we see the world. Since they started in 2015, more than 2000 films have been published on GreatBigStory.com. You can also follow them on Facebook, Twitter, Instagram and YouTube.

Västerbottensost® cheese- a unique story since 1872Västerbottensost®cheese is a hard cheese with small holes and a totally unique flavour. It plays an important and popular part in Norrland’s food traditions and is a craft product whose roots date back to 1872. The Burträsk dairy has been manufacturing Västerbottensost® cheese to the same secret recipe and with the same sure instinct ever since then – allowing the cheese to mature for at least 14 months, or until it has achieved its unique taste and character. Because only when the sweetness, bitterness, saltiness and acidity are in perfect balance can the cheese be given the seal of approval and be known as Västerbottensost®cheese. That’s a huge responsibility and one that ultimately lies with the Burträsk Dairy’s Master Cheesemaker, Thomas Rudin.

The Västerbottensost® cheese brand is owned by Norrland’s dairy farmers through their dairy cooperative association, Norrmejerier.

Västerbottensost® cheese is close to Swedes’ hearts and has received numerous impressive awards over the years, most recently in 2018, when the YouGov BrandIndex ranked it in the top 10 list of Sweden’s most positively talked about brands.

About NorrmejerierNorrmejerier Ek. Förening is Sweden’s most northerly dairy cooperative and is owned by around 460 local dairy farmers – 381 of whom are active milk suppliers located in the provinces of Norrbotten, Västerbotten and parts of Västernorrland and Jämtland. We process just over 200 million kilos of milk every year at our dairies in Umeå, Luleå and Burträsk, producing a range of dairy products such as milk, fermented milk, cream, and cheese. Our product range includes the Norrmejerier®, Västerbottensost®, Verum®, Gainomax®, Fjällfil®, Fjällyoghurt® and Norrgott® brands. Norrmejerier has just over 500 full-time employees and an annual turnover of approximately SEK 1.9 billion. 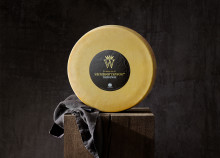